More than 300 people from 17 countries gathered, both physically and virtually, to celebrate the SIF's 30th anniversary, themed “Ties that Bind”.

The guests included the SIF’s Citizen Ambassadors (CA) or volunteers, programme alumni and partners, SIF country representatives, Friends of Singapore, and members of the diplomatic community.

A video percussion performance by Drum Prodigy, a music school that advocates inclusivity and diversity, welcomed the guest of honour and Patron of the SIF, President Halimah Yacob to the celebrations, held on 7 December 2021 at Singapore’s Raffles City Convention Centre.

Addressing the gathering, President Halimah commended the SIF for fostering international cooperation to build greater understanding and uplift lives for the last three decades, as well as throughout the current pandemic.

Enabled by more than 5,500 volunteers from Singapore, and in partnership with more than 700 global institutions, the work of the SIF has made a positive difference to lives across 28 countries. More than 45,000 Friends of Singapore have connected to and collaborated with Singaporeans through the work of the SIF.

President Halimah said the “SIF has played an important role in building people-to-people relations, building up its reputation as an organisation that is committed to be a catalyst for good. Despite the challenges of the global environment, SIF has continued to innovate with the times and stay true to its mission, bringing Singaporeans and the world communities together to do good.”

The celebrations also marked the annual International Volunteer Day, which falls on 5 December.

President Halimah lauded the efforts of the SIF’s partners and volunteers, who “have helped advance Singapore’s goal of becoming a nation of responsible global citizens.”

Among those who received awards was palliative care specialist Dr Ramaswamy Akhileswaran (above), whose volunteer work included leading and training various teams of specialist Singapore International Volunteers for palliative care projects in Indonesia.

In recognition of his exemplary contribution and dedication to international volunteering, Dr Akhileswaran was presented the SIF’s highest recognition – the Global Citizen Award.

Asked about the award, he said: “Volunteering with the SIF for over a decade has enriched my life in so many ways. Sharing our knowledge and gaining the kinship of numerous healthcare professionals and others in Indonesia have brought a lot of joy to my fellow volunteers and myself. I thank the SIF for all the wonderful memories and hope to continue this volunteering journey.”

Dedication awards were also presented to the SIF’s long-serving Citizen Ambassadors who have volunteered with us consecutively for up to ten years.

You can find the full list of award winners here.

Together with our CAs, we also hosted ten virtual networking rooms, prior to the main event. About 60 people who joined in, were glad to be able to reengage with old friends, make new ones or just catch up on our programmes. The evening ended on a high note with the SIF song, “Better World, Brighter Future”. This was a collaborative effort among volunteers, partners, friends, and staff of the SIF.

You can listen to the SIF song here. 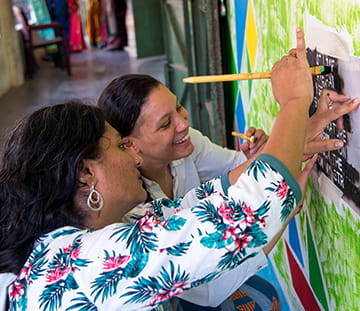